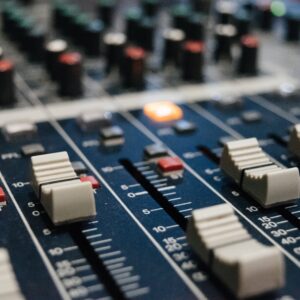 J.C. Hall, LMSW is a Hip Hop artist and clinically trained social worker who recently received the 2020 Jefferson Award for Outstanding Public Service Benefiting the New York Community. In 2010, Hall discovered the work of Dr. Edgar Tyson, the originator of Hip Hop Therapy (HHT), and he began collaborating with him to explore ways of further introducing expressive elements into the approach. Over the years, Hall worked extensively with Dr. Tyson to build upon the framework of HHT by leaning into its parallels with expressive arts therapy. Hall (2016) argues that the intermodal nature of expressive arts therapy naturally aligns with the Hip Hop gestalt through its integration of various artistic elements, such as music, movement, drama and visual art. Through a receptive and expressive approach, Hall focuses on further operationalizing the inherently therapeutic processes involved in embracing and partaking in the creation of Hip Hop.

Since 2013, Hall has run his Hip Hop Therapy Studio program at a “second chance,” transfer high school called Mott Haven Community in the South Bronx—the birthplace of Hip Hop culture as well as the poorest congressional district in the country. The program employs HHT in an individual and group setting through the use of writing, recording, producing and performing original works. Students have in-school access to a state of the art recording studio stocked with a soundproof booth, beat making equipment and turntables, providing them with a supportive community in a culturally reflective environment every day of the week.

Hall primarily attributes the success of the Hip Hop Therapy Studio to Dr. Tyson, who mentored him at Fordham University during his MSW clinical coursework. After Hall graduated from Fordham, the men developed a close friendship and cultivated a strong working relationship, both presenting together and collaborating on scholarly works over several years. In 2016, Dr. Tyson asked Hall to contribute to his textbook on HHT as a co-author, and Hall added several chapters to Tyson’s extensive compilation of unpublished research. You can see the two share a very personal moment in the gut-wrenching and award-winning short documentary, Mott Haven, about the origins of Hall’s program. The film confronts the murder of one of the program’s founding members, showing how HHT culminated in performances from students and staff for communal healing in the wake of the tragedy.

The film and the performances put in perspective the seriousness of the difficulties many of these students face. The school auditorium and newly minted spotlight operator struggling to train the light on moving targets recall a talent show. The juxtaposition of the scene and its purpose – to mourn a brutally murdered classmate – only amplify the disparity between the students’ experiences at Mott Haven and those of their more privileged peers. These kids and the staff are grieving and healing in a public and sometimes agonizing manner, even when they recognize that not everyone who hears their words will understand the meaning.

I asked Hall if HHT can be replicated by a therapist who does not share the same interest in Hip Hop, and he answered that, although there are levels to this work, it all starts with being curious and nonjudgmental. He explained that clinicians could not hope to reach people if they maintain an artificial hierarchy where the therapist is the arbiter of taste. Dismantling that power structure and engaging the youth he works with in a fundamentally curious, collaborative setting that does not scrutinize their personal preferences is central to reaching them.

Engaging with music in this raw, unfiltered way takes practice and, fundamentally, a willingness to stumble. It’s not about perfection. It’s not about always being accurate. It provides the opportunity to get it all out faster than we can assess meaning or exactness and whether we want or are prepared to give words to those feelings. That can be messy, but you also see the kids who work with these organizations connecting ideas, words, imagery, and their own emotions at warp speed. Sometimes, even with the more practiced youth in Mott Haven, you get the sense that they surprise themselves. The point is not to be good, but many of these kids are talented artists. And many won’t escape the challenges they face without a radical reordering of how this country handles intergenerational trauma and inequality and the poverty, hopelessness, and exhaustion endemic to it.

(Stay tuned for more on this series on Hip Hop Therapy next week.)

PrevAwakening to Trauma: A “Coming Out” Story
Let’s Get To Know Tree of LifeNext